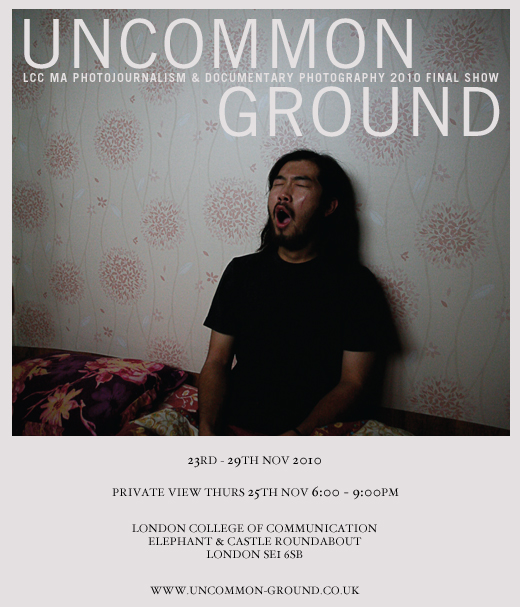 ‘Uncommon Ground is an exhibition of compelling new photo stories from around the globe to mark the culmination of the MA Photojournalism and Documentary Photography 2010 at LCC.
Brought together by their common curiosity and pathos, these 32 exceptional storytellers question the things that unite and divide us all in a world no longer defined by its borders.
Encompassing everything from the deeply personal to issues of global relevance, the group present tales of life inside the South Korean military, floods in Bangladesh, sugar farming in Brazil, and even the subcultures of Britain’s animal psychics and London’s S&M underbelly. Poignant, political, quirky, even kinky, in cutting-edge print and multimedia, Uncommon Ground represents the best of new photojournalistic talent working on the cusp of an ever-shifting industry.’
_______________
I will be exhibiting my project Tulip, about my mother dying from cancer.
Private view Thursday 25th November, all welcome.

Three weeks and three days since my mum died, it is starting to sink in, kind of. Grief is a weird thing, the only way I can describe it is like a grey cloud above your head. Sometimes it is a tiny little cloud in the corner of your head, like a nagging doubt at the back of your mind. You know it is there as you can see and feel it, it’s like a dark spot in my mind. I can feel that it is getting bigger and closer sometimes and other times it feels like it is getting smaller and floating away a bit. Then other times it is this huge storm cloud filling your whole head, covering your brain and over your eyes, it’s like you can not see anything else. You can not shake it off or try to run away from it as it will always catch up. Sometimes it comes on really quickly and unexpectedly, just like a hail storm. Like the other day I was sitting on a train and it just started, tears were pouring down my face, it felt like a rain storm, just only out of my eyes rather than the sky.

Grief, to me, is a whole mixture of emotions: anger, sadness, loneliness, isolation, confusion. All mixed up and fighter with one another. Like anger, I am so angry this happened, so angry my mum went through so much pain, angry that it had to happen, angry that she is gone, but not angry at her at all. I just wish she would come home, but she can’t and that’s what I’m angry at. Anger is a horrible emotion, and one that does no one any good. My mum would not want me to be angry, she was never angry about her diagnoses. She used to always say ‘Well why not me…’ rather than the self-pitying line of ‘ Why we?’ you always hear. She knew her cancer was most likely caused because of her choice to smoke. Maybe I’m angry at smoking and the tobacco companies. They can inflict such pain on others and without any consequences to themselves or ever having to witness the pain they inflict on others, it’s like a victimless crime to them, and this is all for the sake of making money, that makes me very angry. People say, well you have a choice, but I don’t believe that, addiction to whatever is not a choice. Another thing that pisses me off is this bullshit people say like ‘only the good die young’, fuck off what a load of shit. My mum should still be alive, she lost maybe 30 years of her life, and I’ve lost 30 years of my life with her, that’s double my lifetime, I’m going to be alive longer without her than with her. That hurts. She was always so supportive of my career and it really hurts that I can’t share it with her anymore, she didn’t even get to see the end of my present project that is about her, and she wont be at my show this month when loads of other people’s mums will be.

Maybe grief is a good thing, as long as I feel this grey cloud then in a way I always feel her presence. I am not spiritually or religious in any way, quite the opposite, but it does make me think that maybe she is somewhere around. She was such a big character and the idea of that just disappearing is too much to cope with. I would rather think she is somewhere else having a good time.

Another thing that has really hit me, is not just that my mum has gone, but that this person which has so much knowledge on so many different things, and so many stories and memories has gone. All that knowledge and experience has died too. That only really hit me last Friday when I was having lunch with some very old friends of mine, we were talking about cooking and chefs, and I couldn’t remember the name of a restaurant a certain chef cooks at, it’s something I would have just ask my mum and she would have told me all about the place, the chefs and probably some funny story or remark about them, and then it hit me, again, that she is not there anymore to ask. It makes me feel like I really took that for granted. She was knowledgable on so much, not just food stuff, she read all the time and knew about any distant war or remote location and their history. She could talk for days on the history of Afghanistan and all the surrounding Stan’s, she knew all about them, and if she didn’t she would simply go and read about it, and next week she would be an expert. I fondly remember her talking to me about a book on China’s ancient history she was reading, she was engrossed on a part that described some kind of crusade on boats the Chinese attempted hundreds of years ago, but they retreated back to mainland and didn’t try it again. She was fascinated at what they might have seen that had scared them so much, we never found out. To me it feels like a massive library or archive has burnt down, lost forever.

Being a head chef, described in her obituary as the ‘Doyenne of the restaurant revolution’, she knew everything about food, chefs, restaurants, kitchens and cooking. Her cooking was fantastic, and very characteristic of her: no bullshit. Simple, straightforward, tasty, not too much fuss, and always good. She was ‘on the money’ as they say, she knew what people wanted but more importantly she knew what she wanted, and NEVER did anything else. That character was consistent throughout her life not just about food, and it’s something very admirable, she knew what she wanted and fuck anyone else, but never in a selfish way, she was a very caring person, maybe too much sometimes. She was a great friend, she had such a mixture of friends, people she had known for 40 years or young 20-year-old male chefs, all just as special to her. She touched many lives. This is sounding like I am writing an obituary, I’m not. Great ones have already been written. I suppose I am just trying to write down what is going around my head. Although this is a very painful time for me I think it is important to record it in someway. I am now supposed to be a documentary photographer, so I have the need to document everything now, like some kind of magpie, but collecting thoughts rather than shiny things.

So as I get back into my photography work, editing pictures, trying to make a book out of the project on my mum, I think it has become a part of the grieving process. It does bring up sad moments, things that I documented and have forgotten, things we shared. Though in other way it’s nice, I’m sharing more time with my mum. I just hope that the book and exhibition show her in a way she would want to be shown and she would be proud of me…